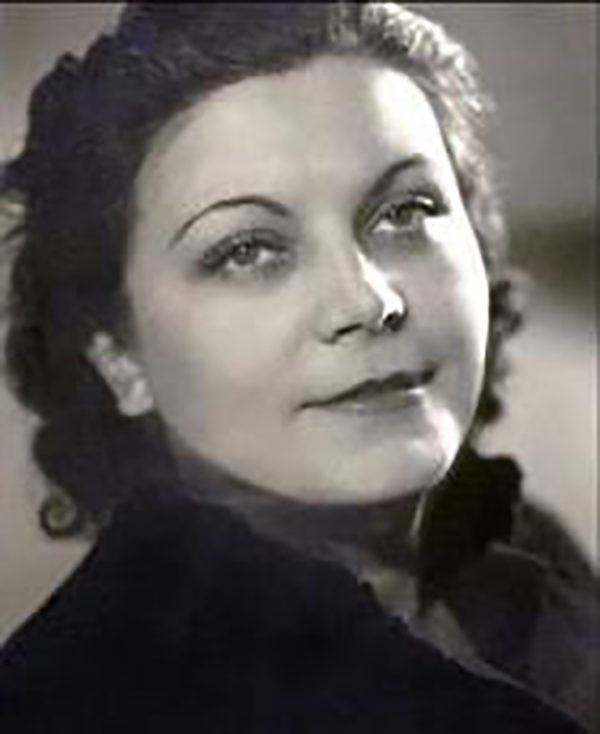 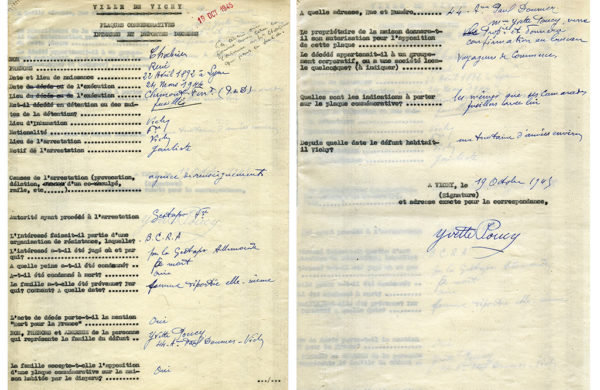 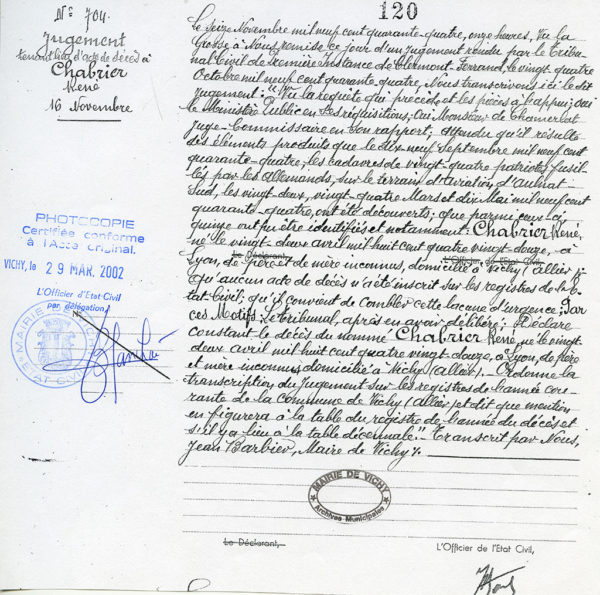 The Marco-Polo network was a part of 266 intelligence networks having operated in France during World War II. It was created in November of 1942 by Commander Pierre Sonneville. Subordinate to the Central Bureau of Information and Action of Free France, the network evolved rather quickly. In Vichy, its members could count on the unfailing help of several individuals, among whom were the Police Commissioner Marc Juge, Madame Chabrol, Henri and Yvonne Moreau, as well as René Chabrier and his companion Yvette Poucy.

René Chabrier and Yvette Poucy lived at 44 Avenue Paul Doumer. One of their missions consisted of identifying civil servants or employees from ministries and public administrations which were the most susceptible to damage or harm the Resistance. The information gathered by the couple and by the Marco Polo agents were assembled, summarized, and then sent to Lyon or Mâcon before being transmitted to superior authorities of the Resistance.

On 18 January 1944, Commissioner Marc Juge, who played a key role within the network (and lover of Yvette Poucy), was arrested. His friends and collaborators would only hold out for one month longer. On 23 February, it was Henry Moreau, René Chabrier and Yvette Poucy’s turn to be arrested by French agents of the Gestapo.

The couple was quickly separated. While Yvette was transferred to the Moulins Prison, then sent to Fort de Romainville and deported to Germany, René Chabrier was interrogated for several hours by the Sipo-SD of Vichy, before being transferred to Moulins then to Clermont-Ferrand, where he was referred to the German Military Court accompanied by Marc Juge and Henri Moreau. The court condemned them to death “for espionage at the expense of an enemy power”. They were shot by the Gestapo on 25 March 1944.

Yvette Poucy, detained in Ravensbrück, would not learn of their death until after her liberation in April of 1945.