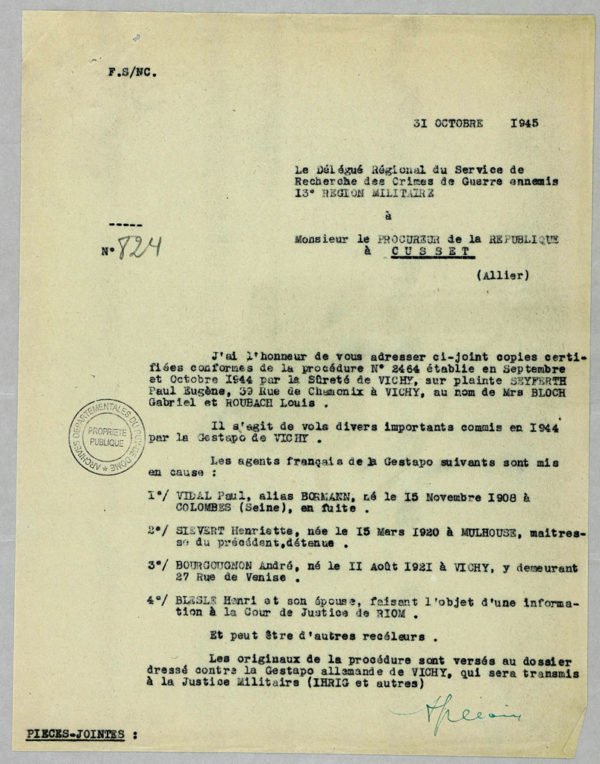 Jany Batissier was born in Moulins in 1909. He was promoted to police inspector in 1934. Four years later he was suspended by the Popular Front due to his extreme right militancy and membership of the Cagoule, a fascist-leaning anti-Communist group. But new professional opportunities arose for him during the Second World War.

Shortly after the creation of the French State, Batissier became one of Admiral Darlan’s personal guards. Late in 1942, he joined the Vichy Gestapo, directed by Geissler, and moved to Boulevard des États-Unis, in the heart of the German quarter. As his sister was Geissler’s mistress, he was rapidly promoted to head of a brigade. Until the Liberation, Batissier and his henchmen carried out numerous arrests in the Vichy region.

He was arrested in the spring of 1945, sentenced to death the following year and shot at Nevers on 18 July 1946.

The high wages paid by the Germans were difficult to refuse for many working-class men and women whose economic situation had constantly deteriorated since the beginning of the war, and several inhabitants of Vichy were lured by this bait. After his dismissal from the French Police and separation from his wife in 1942, Henri D. had serious financial difficulties. He became a black marketeer and collaborated with the Germans. He was hired as a Gestapo agent for 4,000 francs a month and in addition received bonuses of 2,000 to 10,000 francs for information given to the German police.